Author for the Month of September

A Zimbabwean novelist and playwright who was born in Zambia, Petina Gappah is the author of two critically acclaimed novels, Out of Darkness, Shining Light and The Book of Memory and two equally acclaimed short story collections: Rotten Row and An Elegy for Easterly. Her first play premiered in Harare in 2019, and her second, Black Sunlight, about the writer Dambudzo Marechera, will premiere in 2021. Petina’s work has been published in more than a dozen languages, including by among others, Der Spiegel, The New Yorker and The Times Literary Supplement. Petina is also an international trade lawyer. She has law degrees from the Universities of Cambridge, Graz and Zimbabwe

This is how we carried out of Africa the poor broken body of Bwana Daudi, the Doctor, David Livingstone, so that he could be borne across the sea and buried in his own land. For more than one thousand and five hundred miles, from the interior to the eastern coast, we marched with his body; from Chitambo to Muanamuzungu, from Chisalamala to Kumbakumba, from Lambalamfipa to Tabora, until, two hundred and eighty-five days after we left Chitambo, we reached Bagamoyo, that place of sorrow, whose very name means to lay to rest the burden of your heart.

We set him down in the hushed peace of the church. And all through that long night prayed and sang and keened the seven hundred manumitted slaves from the Village of the Free. After the tide came in the following day, they lined up on either side of the path that led to the dhow of his final crossing. And we watched until the white sail of that rickety wooden boat was a small dark triangle on the far horizon, and all that we could see of him was the sky meeting the shimmering sea.

He gave up his life to the doomed, demented search for the last great secret of that heaven-descended spring, the world’s longest river; he gave his all to uncover the secret that had preoccupied men of learning for more than two thousand years: the source of the Nile.

In the final two years of his life, both before and after he was relieved in Ujiji by the American, Bwana Stanley, he was as a man possessed. In every town and village and hamlet through which we passed, Bwana Daudi asked the same question. Had any person seen or heard of a place where four fountains rose, four great fountains that rose out of the ground, between two hills with conical tops? They were the fountains described in ancient times by a long-dead sage called Herodotus, he said, from the far-off land of Greece. To find these fountains, he believed, was to find the source of the Nile.

When they asked to know what this Nile was, he said it was the world’s longest river, but more than a river, it was a miracle of Creation splendid beyond comprehension. ‘For it flows for every day of the year, for more than one thousand miles through the most arid of deserts, all without being replenished, for there are no tributaries that flow to fill it,’ he said.

Bwana Daudi was certain that these fountains linked to four great rivers that he knew already, those of Kafue, Lomame, Luapula, and Zambezi. Herodotus, he said, had written that water from these fountains flowed in two directions, with half going up to Egypt and the other half flowing south. And thus it was that we followed the southwards flow of the Luapula into the swamps of Bangweulu, but there, instead of finding the headwaters of the Nile, in the village of Chitambo, Bwana Daudi found his death.

He is as divided in death as he was in life. His bones lie now in his own land, entombed in the magnificence of ancient stone. In the grave we dug for him under the shade of a mvula tree, his heart, and all the essential parts of him, are at one with the soil of his travels. The grave of his bones proclaims that he was brought over land and sea by our faithful hands. The wise men of his age say he blazed into the darkness of our natal land to leave behind him a track of light where the white men who followed him could go in perfect safety.

This is all we sixty-nine have ever been in his world: the sixty-nine who carried his bones, the dark companions, his dark companions, the shadowy figures in the caravans in which he moved. We were only ever the pagazi on his journeys, the porters and bearers who carried his loads and built his huts and cooked his meals and washed his clothes and made his beds, the askari who fought his battles, his loyal and faithful retinue.

On the long and perilous journey to bring him home, ten of our party lost their lives. There are no stones to mark the places where they rest, no epitaphs to announce their deaths. And when we who remain follow where they led, no pilgrims will come to show their children where we lie. But out of that great and troubling darkness came shining light. Our sacrifice burnished the glory of his life.

This story has been told many times before, but always as the story of the Doctor. And sometimes, as appendages, as mere footnotes in his story, appear the names of Chuma and Susi. They were the first of his companions, the longest serving and the oldest, for the rest of us only joined them in the months just before Bwana Daudi’s death.

In some incarnations, they are two friends. In yet others, they are two brothers. Always they are Bwana Daudi’s most faithful servants, just the two of them carrying his bones; a testament to the strength of the bonds of servitude, confirming the piety of Christian faith, his faith, his piety, his sainthood. For who but a saint could inspire such service?

They are sometimes called Susi and Chuma, but more often, they are Chuma and Susi. Seldom do their full names appear: never are they James Chuma, whom Bwana Daudi rescued from the bondage of slavery, and Abdullah Susi, the Mohammedan shipbuilder from Shupanga who served a Christian master. They are remembered, if at all, as the lone bearers of Bwana Daudi’s bones, as those who were there before.

What if we had known then what we know now?

When we bore his body out of Africa, we carried with us the maps of what the men of his world would come to call his last great discovery, the mighty river called the Lualaba. What if we had known then that our final act of loyalty to him would sow the seeds of our children’s betrayal, their fate and their children’s children’s also; that the Lualaba of his drawings was the mouth of the great Congo of our downfall, the navigable river down which would come the white man, Winchester rifle aloft and Maxim gun charged?

In just eleven years, the England to which we gave back its glorious son would gather at a table with others and, in the casual act of drawing lines on a map, insert borders and boundaries where there had been none, tearing nations and families asunder. Down the Lualaba they came, down the great Congo, with steamships and guns, with rubber plantations and taxes and new names for all the burial places of our ancestors. And every one of the men, women, and children that we met on our journey, every friend and foe, slaver and enslaved, would, in a matter of years, be claimed as the newest subjects of Europe’s kings and queen.

All that was to come, but first:

This is more than the story of two men, Susi and Chuma; it is also the story of the caravan leaders Chowpereh and Uledi Munyasere; of Amoda, son of Mahmud; and of Nathaniel Cumba, known as Mabruki. It is the story of the men from the Nassick Mission in India, manumitted slaves all, among them Carus Farrar and Farjallah Christie, who, as easily as though they were slicing a fish, opened up the Doctor in death, and of Jacob Wainwright, who inscribed the epitaph on the grave of his heart. It is the story of the women who travelled with us, Misozi and Ntaoéka, Khadijah and Laede, Binti Sumari and Kaniki.

It is the story of Halima, the Doctor’s cook, who scolded long and hard until we said yes, yes, we would send him back whence he came, to his home across the water. It is the story of the boy Majwara, the youngest of the companions, who found the Doctor kneeling in death, and, with every beat of his drum, beat the life into our legs as we marched on that long and toilsome journey into the interior.

It is the story of Bwana Daudi, of his final years of suffering and his relief by Bwana Stanley and the sights that broke his spirit and wounded his heart even as he marched on, unto his death. It is the story of all these and many more, the story of the Doctor’s and our own last journey: the march to his certain death, and on to Bagamoyo. 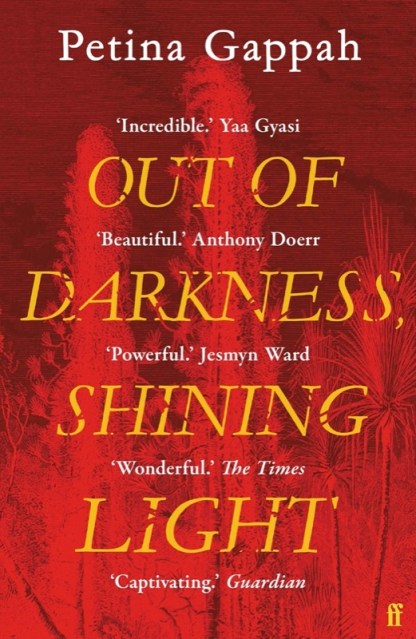 #OneRead Reviews 'Out of Darkness, Shining Light': My Favourite Character

#OneRead Reviews 'Out of Darkness, Shining Light': The Writing Style

#OneRead Reviews 'Out of Darkness, Shining Light': A Recap