Nnamdi Ehirim is a Nigerian writer based in Lagos and an alumni of IE Business School, Madrid. Nnamdi’s debut, Prince of Monkeys, is a provocative novel which tackles politics, class, spirituality, and power as a group of friends come of age in Lagos, Nigeria.

Nigeria in its entirety is a wonder of this world. Like all other wonders, it stands as a testament to the ambition of humanity: how one man can dare and indeed succeed at imposing a personal dream on an entire populace, leaving a polarised legacy of successes and failures for future generations to gawk at, in awe. Everyone has seen or heard something about this wonder and so naturally assumes that they know Nigeria. They seem to forget that wonders are so called because it is in their nature to surpass anything our minds could previously imagine, regardless of whatever they might have seen or heard. But, excluding individuals with firsthand experience, most people have no clue or insight into the wonder of Nigeria, its beauty, its grotesquery.

Of all the troubled misadventures of my Nigerian existence, the one I reflect upon with the most enthusiasm is my going to a prison cell. Not my first venture, which was at the age of eight, when I followed the prison-support team of my friend’s church to evangelise inmates, back in 1983. That particular venture was quite uneventful. My second venture, some nine years later, was all sorts of incredible. I always find it difficult sharing the details because I believe the past, like stale water, should be left unstirred lest the petrifying odour of our mistakes rises to distort our perception of the present. Nonetheless, I will proceed, because I have an even greater conviction that the past, still and unmoving, is a reflection of us in our clearest forms.

The night was young and promising, and my friends and I had escaped the supervision of our parents to witness the gospel of our youth preached live at the Afrika Shrine. The message was simple: indulge in a vice today, but be guided by virtues every day. After all, the morality of any gospel is subject to every person’s own interpretation.

This was the interpretation my friend Mendaus had passed on to me the first day he brought me to the Shrine, the same message I had confirmed to myself when I visited the Shrine time and time again to watch the King of Afrobeat, the Oracle of the Shrine. The same message we were sharing with our friend, Pastor’s son, still a non-believer.

As the four of us walked closer to the Shrine, I could hear the message blaring loudly, guiding me through the darkness into its gates. Then this young man, a total stranger, called out to us from his shame, an arrant boldness under the cloak of the night, and asked if we had any spare change. He did not plead for mercy like the beggars at the bus station. He did not attempt to coerce us with God’s infallible promises. He asked with sheer audacity.

And I gave, not out of pity or the desire to reap divine dividends, but out of understanding. An understanding of how much a man’s pride must have been withered away by the attrition of desperation, before he is able to approach another man and demand to be fed.

I saw more men and women like this as I drew nearer to the Shrine. They seemed able to exist only in the darkness, like bats and cockroaches—filth in the eyes of the world. I would be a liar to say I saw them differently. Closer to the Shrine, their population was diluted by a crowd of brighter spirits.

It was about eight o’clock, but a multitude had already gathered in the street in front of the Shrine: beautiful women in street-sweeping boubous; oyinbo women wearing bum-shorts; men with ties slacking round their necks; and the diligent slaves of ambition, loitering behind the curtains of society’s approval.

We struggled through the crowd, eventually pushing through the iron turnstile under the probing eyes of plain-clothes security men. We got a table not too far from the entrance, where we could ­admire the colourful murals on the wall, portraits of American civil rights activists, Rastafarian icons and negritude priests. All rebels of their time.

By the pool table, a group of three laughed over cigarettes and maybe something else; they didn’t seem too invested in their game. In front of the stage, a white man gyrated, his fists pumping the air, his legs wiggling like noodles spun around a fork. Paddling himself on a skateboard, a little boy with legs folded under him, spun in circles. They all appeared like they had no cares, lost to the fantasies of their own worlds.

“So, which one keeps you guys coming back? The women or the music?” Pastor’s son asked.

“You forgot the drinks,” I replied. See, why should we even have to choose?”

“Exactly!” Mendaus was in high spirits. “Like bread, butter and tea. Or garri, milk and sugar. One alone is trash. Two together is the bare minimum. But if you combine all three, you know you’re working miracles.”

“What’s the difference?” Zeenat asked, feigning interest as she inspected her nails.

“Miracles are divine, ordained by God, but magic—”

“This must be the heart of darkness then,” Mendaus raised his glass.

“To hell with you,” a voice muttered from behind us. “And to hell with Conrad!”

I turned to see a figure leaning against the wall in the shadows, not too far from me. The figure was reminiscent of a Highlife band leader—bare-chested, his tight trousers hanging on his hips. Arms folded across his chest, he showed off the relics of well-toned muscles.

“Excuse me, did you say something?” I asked.

“You should be asking your friend,” he said. “He is the one borrowing ideas from Joseph Conrad.”

Mendaus and I exchanged glances across the  table, silenced and surprised by the stranger’s interruption.

“Joseph Conrad portrayed the black man as a wild beast waiting for the white man to save him from his own savagery. But my own brother here, in a fancy shirt and spectacles, is looking like Conrad and talking like Conrad.” He paused for a bit, as if expecting us to say something. “You’re a smart young fellow. I am sure you have heard this before: ‘In rejecting the capitalist attitude of mind which colonialism brought into Africa, we must reject also the capitalist methods which go with it.’”

Whilst Mendaus brooded over the words, I picked at my cuticles, determined to deflect the stranger’s gaze.

“I have never heard those names before!” exclaimed Mendaus.

“Julius Nyerere, father of Tanzania,” said the stranger. “You see? You should add more Africans to your reading list.”

I pulled out a pack of cigarettes from my trouser pocket and offered him one but he declined, which was weird because he had a lighter in his hand. I shrugged it off and asked him for a light.

He handed me the lighter and told me to keep it.

“I hate lighting other people’s cigarettes,” he said bluntly. “I mean, if you’re the one who wants to smoke, then light it yourself, my brother. Don’t bother me. You know, I’m a straightforward guy, even though most people assume I’m some type of riff-raff.”

He paused, and suddenly the air got cooler. I lowered my head to sip from my glass of whiskey but my eyes stayed fixed on him.

“I’m not like those bureaucratic lunatics,” he continued. “I’m not like those bastards from the government house who go on diplomatic assignments and come back to mimic the whites, offering each other lights. When those ones see an ordinary man on the road, they throw matchsticks at him.”

He sounded angry, but when I looked up he was speaking with an unconcerned smile.

“But enough of all this. Let us enjoy the underground spiritual game that is Afrobeat, okay?” the stranger said.

As he spoke, a troupe of tall, slim women ran up the stage on tiptoes; some of them diverted into cage-like contraptions at various ends of the hall. They had noisy strings of beads around their ankles, and beaded mesh wrapped around their waists and bosoms.

The musicians took the stage one by one. The saxophones at each end of the stage blasted passionately at the command of their masters. Two men positioned around the centre of the stage caressed bass guitars. The drummer and the keyboardist were almost hidden away behind the talking drummers and backup singers. After the instrumental jams and solos, Pidgin chants filled the room as a man clad in a tie-dyed dashiki took centrestage.

“What do you do, my brother?” the stranger said to Pastor’s son.

I topped up my whisky.

“I’m a student. I just finished school at—”

“That’s who you are, my brother. My question was what do you do?”

“No, my brother, that’s bullshit! Let me help you out. I, for example, am a musician. I use my music to liberate the black man from oppression. That is what destiny called me to do. You feel me, my brother?”

“Don’t get me wrong. I’m not judging you.” The stranger paused. “Tell me, what do you know about this Shrine?”

I was distracted by one of the dancers on the stage. The stranger tapped me on the shoulder. “Some of them look like riff-raff but they are fighters. They come here to listen to the message that will keep them alive. They come in solidarity with the movement. Now to the point, my brother, I’m not expecting you to know who you are, and what you do today. All I’m saying is that you should never give up trying to answer those questions.”

“I am Olufela Anikulapo—he who carries death in his pouch,” he said as he stepped out of the darkness.

I lost my balance and fell off the chair. When I gathered myself back together, I could see the looks on Mendaus’s and Zeenat’s faces. Pastor’s son burst out laughing. The stranger laughed as well. He withdrew some folded-up naira notes from his pockets and threw them in the middle of our table.

“My friends, I carry more than death in my pocket,” he said, exposing discoloured teeth. “Use that to have yourselves some fun tonight. Get another drink or something. As for me, I have a show to get on with.” 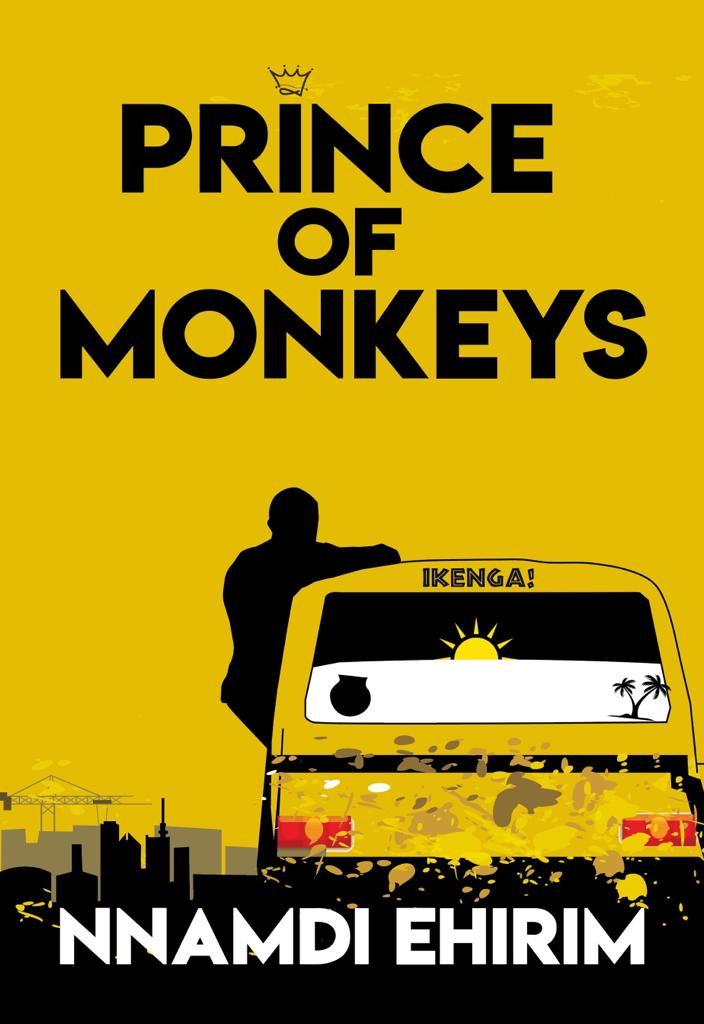 #OneRead Reviews Prince of Monkeys: The Writing Style
«
Prev
1
/
1
Next
»