Author for the Month of July

Mukoma Wa Ngugi is an Associate Professor of English at Cornell University and the author of  The Rise of the African Novel: Politics of Language, Identity and Ownership, the novels Mrs. Shaw, Black Star Nairobi, Nairobi Heat, and two books of poetry, Logotherapy and  Hurling Words at Consciousness.   Unbury Our Dead With Song (a novel about competing Tizita musicians) is forthcoming from Cassava Republic Press (Spring of 2021).   Some of his works have been translated into German, Turkish and French.  A member of the African Literature Association’s Executive Council, he is the co-founder of the Mabati-Cornell Kiswahili Prize for African Literature. In 2013, New African magazine named him one of the 100 most Influential Africans.  In 2015 he was a juror for the Writivism Short Story Prize and the Neustadt International Prize for Literature.   He co-edited with Prof. Laura Murphy, a Special Issue of New Orleans Review titled The African Literary Hustle. In 2016, he wrote an eight part play radio play, Drugs to Kill, Drug to Cure for Deutsche Welle that was translated into Portuguese, Lingala, Kiswahili, Hausa and  French.  Mukoma holds a PhD in English from the University of Wisconsin, Madison, an MA in Creative Writing from Boston University and a BA in English and Political Science from Albright College.  In 2009, he was shortlisted for the Caine Prize for African Writing  and in 2010 for the Penguin Prize for African Writing for his novel manuscript, The First and Second Books of Transition (Mrs. Shaw). The German translation of Nairobi Heat was named the 2014 Crime Book of the Season by Buchkultur.   A former co-editor of Pambazuka News and political columnist for the BBC Focus on Africa Magazine, Mukoma’s columns have also appeared in The Guardian, International Herald Tribune, Ebony.com, Chimurenga, Los Angeles Times, South African Labour Bulletin, Africa is a Country,  Daily Nation,,  and Business Daily Africa. He has been a guest on Democracy Now, NPR, Al Jazeera, Nation TV and the BBC World Service amongst others.

The moment Baba Ogum opened his eyes, he realised he was going to get shot. And he would die. Baba Ogum realised it even as his body continued to obey his earlier command to stir, even as he read the warning — be still — in Kalumba’s frantic eyes. In the same sharp flash with which you realise, a moment before your hand lets go, that you are inevitably going to drop a glass of water, and it will break, Baba Ogum realised he shouldn’t have opened his eyes, he shouldn’t have flailed his arms, groping to find where he was — he should have kept his eyes closed and his body limp. He should have remained dead, and because he had not, he was going to get shot. Their eyes locked. One pair a few seconds from death managed a sad familiar smile that said I will not betray your hiding spot. The other, the hidden pair, promised in exchange that they would never let go of what they were witnessing.

What had brought Baba Ogum to this point? A conscience and a Bible — short and to the point. That just about summed up his life. He had not been surprised when they came for him. He had in fact anticipated just a routine questioning, a few inconvenient hours and he would be on his way. But in extraordinary times, he was learning, nothing remains predictable for long. There had been a coup attempt — he should have taken extra precautions. At the beginning Baba Ogum had been reluctant to speak to the flesh. His calling was to make good Christians. But as starved, bruised, and battered bodies walked into his church every Sunday, he could tell that the faithful were losing faith in both worlds. They had long ago lost faith in the world of Bata Shoe Company and Goodwill Tea Plantation where most of them worked. And now the better world of the faith was losing its lustre. Faith feeds on hope. To preach to the flesh was a pragmatic choice. As he lay there just a few seconds from dying, his first sermon flashed through his mind. His congregation walking in dutifully for two hours of escape before returning to their real worlds, and he, his heart beating into his chest, reminding himself that today he had to speak to their flesh — and that in the process he would be making powerful enemies. He chose the sermon carefully, just like any artist with a canvas, each stroke an understatement that resounded outside of its colours to become amplified in the minds of the audience. A good artist suggests, he told himself, and so he started.

There is Judas and there is Peter. Judas betrayed Jesus for thirty pieces of silver, with a kiss. And Jesus told Peter, “I tell you, Peter, before the cock crows this day, you will deny three times that you know me.” And so it happened that after Jesus was captured, Peter, though he’d vowed to follow Jesus to his death, instead followed in the footsteps of Judas the traitor, denying Jesus three times. Not once or twice, but three times. There is Judas and there is Peter. Judas betraying, Peter denying. Let me ask you, whose sins were greater? The one who betrayed or the one who denied? In our times, whose sins are greater? Those that betray us for the thirty pieces of silver or the pious that stand by, denying the injustice of it all? We, the people, are the body of Christ; the State, Judas. Need I tell you who Peter is? Go home — you have much to do. 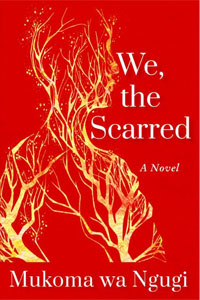 Why I Read - Mukoma wa Ngugi

Choosing the Narrative Style for "We, the Scarred" - Mukoma wa Ngugi

How I Got The Idea For We, the Scarred - Mukoma wa Ngugi

On the Internationalism of the Characters in We, the Scarred - Mukoma wa Ngugi

#OneRead Reviews "We, the Scarred": A Journey Around Africa

My Favourite Character in We, the Scarred

#OneRead Reviews 'We, the Scarred": The Writing Style

I Love The Writing Style in We, the Scarred

#OneRead Reviews "We, the Scarred": The Writing Style

One Read Reviews - My Favourite Character in "We, the Scarred"