Born in Kano, Hadiza Isma El-Rufai holds BSc and MSc degrees in Architecture from Ahmadu Bello University, Zaria, Nigeria, and an MBA degree from the same university. She also has an MA in Creative Writing from Bath Spa University, Bath, UK.

She  is the founder of the Yasmin El-Rufai Foundation which aims to awaken and nurture creativity in children, and improve the literacy skills of disadvantaged young women in northern Nigeria.

Hadiza currently lives in Kaduna with her husband and children. An Abundance of Scorpions is her first novel.

The alarm clock woke me at dawn that Saturday in February 1996. I quickly muted the ringing and glanced at my husband. Yakubu lay on his back, his chest rising and falling. Even in sleep, his forehead was furrowed, and I noticed, not for the first time, that there were more grey hairs on his head. I got up quietly, slid my feet into my slippers and tiptoed out of the bedroom, leaving the door ajar.

A cool breeze slithered in through the kitchen window. It was still dark outside, but I could tell from the dust-laden wind that it was going to be another dry harmattan day. I began to prepare the kunu like I did every day in the holy month of Ramadan. The dried tamarind pods I’d soaked overnight in water were soft now and had turned the water a golden brown. Sieved, the juice would give some tartness to the pap. I measured out the millet flour, poured in a cupful of the tamarind juice and
stirred vigorously to ensure that no lumps formed. Then I poured in boiling water until I got the right consistency–my husband liked his pap a little runnier than normal.

Back in the bedroom, Yakubu was still asleep. But just as I bent down to wake him, he opened his eyes and asked, ‘What time is it?’
‘Four-thirty. We have less than an hour.’
He looked at the tray I’d placed on the bed and pulled himself up. I leaned in, planted a kiss on his nose and sat down beside him. I was happy that we were travelling to Kano that morning to spend the Eid-ul-Fitr holiday with his family. He would be able to get some much-deserved rest. I had never learned to drive, otherwise I’d have driven so he could sleep some more.

Apart from his regular job as a paediatrician at the Katsina General Hospital, twice a week Yakubu put in three hours at a private clinic nearby. He had to make as much money as possible to pay for the fertility treatment. We had already undergone three IVF procedures and were preparing to try again.
‘What are you thinking about?’ Yakubu’s voice cut my thoughts short.

I poured some kunu into a bowl and passed it to him. ‘I’m not doing any more IVF,’ I said. I was surprised by the way the words came out of my mouth, straight as arrows. I’d suffered three miscarriages in the first two years of our marriage. Probably my fault. I worked too hard, volunteering every time the hospital needed a nurse to do overtime. When I got pregnant the fourth time, I quit. I carried the pregnancy to full term and gave birth to our daughter, Fatima. The baby boy that came a year later arrived premature and lived for only two days. Since then my womb had refused to pay any heed to my prayers.

My husband consistently assured me he was satisfied with the one child we had, but I insisted on trying for another. I’d always wanted a large family – three girls and
three boys. I’d even chosen names for them. Yakubu took a few spoonfuls of kunu in silence, then wiped his mouth with a tissue. ‘Is this about money?’ he
asked, looking at me earnestly.
‘It’s not just that,’ I said. ‘I’ll be forty in June. I’m getting too old for a baby.’ I exhaled a sigh. ‘And frankly, I’m tired.’

For years, I’d endured bloating and nausea, side effects of Clomid, the fertility drug my doctor prescribed.

Yakubu put up with my mood swings and the days of crying that followed each failed procedure. He never complained. He put his arms around me. ‘But Tambaya, you’ve always wanted more—’
The finger I placed on his lips hushed him. ‘I’ve made up my mind. We should enjoy our lives before we grow old.’
His eyes peered into mine. ‘Are you sure about this?’ he eventually asked.
‘I am.’
When his body relaxed against mine, I realised how tense he’d been. I listened to his heart beating and felt the warmth of his body through the soft, striped pyjamas.
The decision I’d taken was the right one. We’d be able to spend more time together as a family. He pulled me close and covered my mouth with his. Slowly, his hand slid under my nightgown and found my bottom. He stroked and he squeezed. I glanced at the clock on the wall, worried about the time. After the call to dawn prayer, it was forbidden to eat, drink or have sexual intercourse until the time of iftar, at sunset.

I made to get up, but he held me firmly. ‘We’ve got time,’ he whispered as he began to caress me, kissing my chin, my neck, his beard tickling my breasts. A pleasurable sensation erupted between my legs. I arched my back and pressed closer. He pulled my nightgown over my head. I started to unbutton his pyjama top, but I fumbled. He took over, got the job done in a second and flung it aside.
By the time he turned me on my back, I was more than ready. He pushed into me, our movements in sync – familiar, delicious, intense.

The muezzin’s melodious call flowed in through the open window. Still entwined, Yakubu and I looked at each other and smiled. We’d made it in the nick of time.

His fingers caressed my hair. It was ebony black and naturally silky, incongruous with my decidedly African features. He loved to touch it, claiming it was attributable to a genetic throwback from an unknown Arab ancestor. He gave me a quick kiss on the forehead before swinging his slender frame off the bed and heading to the bathroom. Ten minutes later, he came out towelling his back. It was my turn now. I went in and took the ritual janabah bath that was mandatory after sex, before doing my ablutions in preparation for the fajr prayer.

When I came out of the bathroom, Fatima was standing in front of her father with her back to me. She had on a cotton atampa blouse; its matching wrapper hung
limply in Yakubu’s hand. It didn’t surprise me that my daughter was up so early. She’d been striking the days off on the calendar in her room. Clearly relieved that I was there to take over, Yakubu handed the wrapper back to Fatima and pushed her gently in my direction. It took me less than a minute to wrap the flowery cloth around her waist and tie the ends in a secure knot. I pulled her into my embrace, breathing in the coconut fragrance of her hair cream. She let me hold her for only a few seconds before wriggling out of my arms. I did my prayers on the small rug that was always spread out in the far corner of our bedroom. I was still seated there, chanting Bismillah, Alhamdulillah, Allahu Akbar, counting on my wooden charbi, when Fatima came and sat beside me.
‘Mama, why didn’t you wake me up for sahur?’ she asked, thrusting her lower lip out in a sulk.
‘Haba, Fatima, you’ve done ten. That’s enough.’
‘I want to do the last three,’ she said. ‘I could have done all of them if you’d let me.’
‘Anyway, we’re travelling. People on a journey can choose not to fast.’
‘You know what, Fati? Let’s make a deal,’ Yakubu said. Fatima and I turned. Seated on the edge of the bed, he’d been watching us. ‘The day you’re able to tie your
wrapper by yourself, we’ll let you fast throughout the month of Ramadan.’
Our daughter appeared to be satisfied and nodded.
‘Come and eat something.’ I stood up and pulled her along.
‘I’m not hungry.’

‘OK,’ I said. In about an hour, she’d be singing a different tune. ‘But you must go and use the toilet before we leave.’ 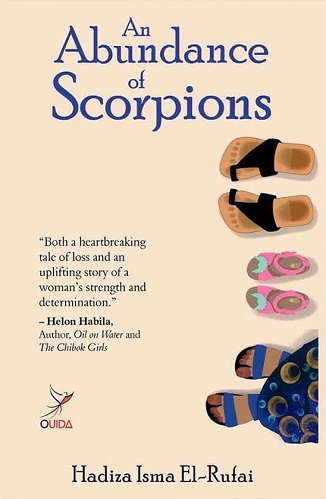 One Read Reviews: 'An Abundance of Scorpions' by Adenike Lanlehin
«
Prev
1
/
1
Next
»