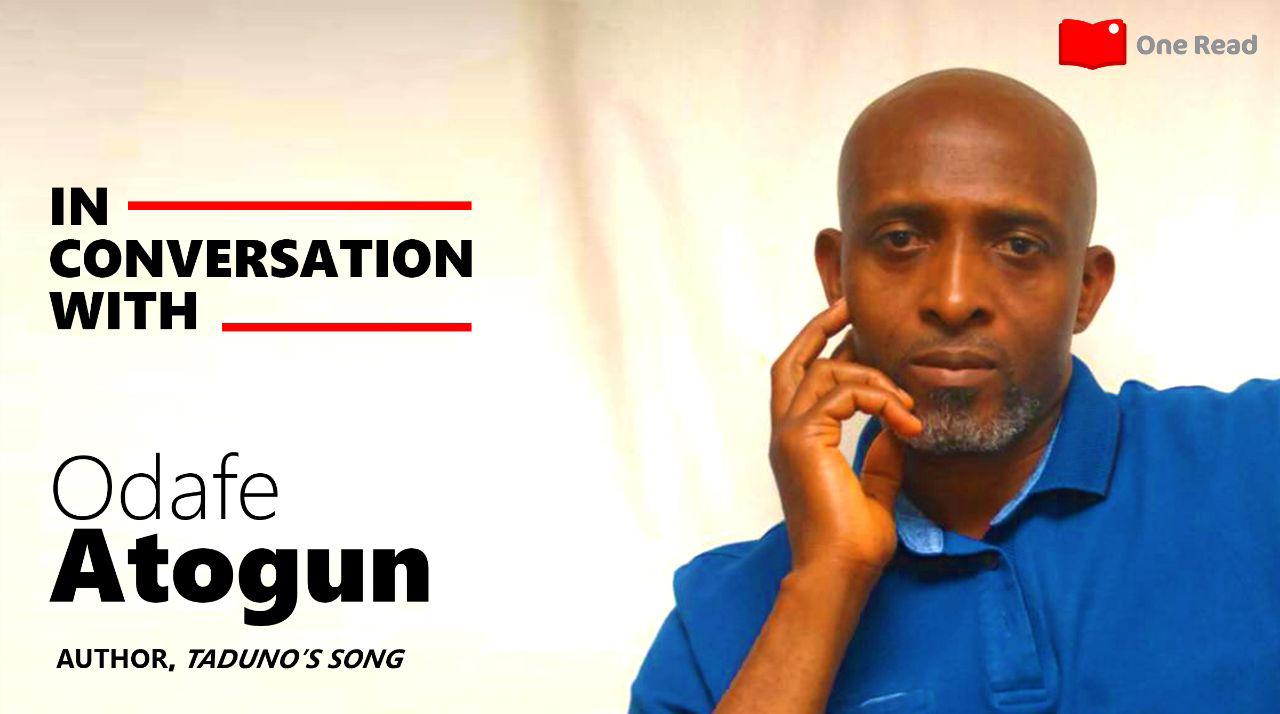 Odafe Atogun is a journalist and author of two novels: Taduno’s Song and Wake Me When I’m Gone. In this interview, he talks about the former, the One Read Book of the Month for March 2021.

One Read: Your novel Taduno’s Song is One Read Book of the Month for March 2021. How do you feel about this? Any observations during the course of this reading cycle on the One Read App?

Odafe Atogun: It is thrilling, to say the least. I feel greatly honoured too. But most importantly, I’m happy that more readers across the continent have the opportunity to access my work simultaneously. In the course of this reading cycle I have come to realise that the writer and the reader are perpetually united in a relationship that can best be described as a labour of love.

What inspired you to write Taduno’s Song, and how long did it take to write?

I have always marvelled at the power of the arts. At a point in my life, long ago, I came to realise that creativity, at every level of life, spells progression and rebirth. And then on a holiday trip to Dublin in 2011, an Irish friend took me sightseeing to Bono’s house and Enya’s Manderley Castle in Killiney, and he spoke glowingly of these iconic musicians. It occurred to me then that my country Nigeria used to have an iconic musician who gave hope to our struggles as a nation. It was then that the idea came to me to fictionalise the struggles of that great man. Taduno’s Song is the product of that idea. The build up to the writing took a couple of years. The actual writing itself took three uninterrupted months in which all I did was write, eat, sleep.

What role does music play in your writing?

Music gives me tempo. Like a ballet dancer, it helps me to achieve the grace of movement, to achieve cohesion and flow, to explore big universal themes in the most minimal fashion possible.

Taduno returns from exile to find that he has been forgotten. Is this a commentary on the dilemma of the artist in society?

Yes, you could say that. It could also be an indictment of all of us, of a society where fear and self-interest make us to shy away from truth.

This novel celebrates the restorative power of music. What would you want the reader to take away from this?

That our individual gift is not meant for our personal glory but for the betterment of society. This is why it is called a GIFT. A gift is something you use to impact society positively, not to feed your ego.

What has it been like for you as an author during this global pandemic?

Candidly, it has been a introspective period for me. A period that made me realise that we actually do not have so much time in this world. So these days I tend to devote more time to my writing, to the only thing I will leave behind when I’m gone.

I have described this before in one or two interviews. To capture it succinctly, I first must wear myself out through little house chores and rigorous exercise and then I stay under the shower for an eternity before I can slip into the world of calm and silence that allows me to write. In writing a story, names are very important to me. I must assign my characters names I can relate with, some of which are inspired by people I know, but my characters are not necessarily modelled on these people. For example, not many people know that the name TK in Taduno’s Song was inspired by Toni Kan (TK) whom I have known since 1996 or thereabouts. And Aroli was inspired by an old classmate who had similar traits.

Do you believe in writer’s block; and if so, how do you deal with it?

Writer’s what? LOL! Of course, I suffer from writer’s block when I’m broke. Once my financial situation improves and I’m able to go on a shopping/spending spree, my writing gets back on track. On a more serious note, I just stop writing and focus on other things until I feel that pull again.

What are you working on right now, and what is your current reading?

I just finished a book which is currently with my agent. Fingers crossed. Right now, I’m trying to work on two books at the same time—the sequel to Taduno’s Song as well as a heartbreaking account of a true story about a man whose life was turned upside down when his wife eloped with his sister’s husband. What I’m reading? I’m presently reading two books. Yes, two books. One in daytime, the other at nighttime. It is an experiment of sorts for me. The Childhood of Jesus by J. M. Coetzee in daytime and Odufa by Othuke Ominiabohs at nighttime.

Taduno’s Song is published in Nigeria by Ouida Books and is available to purchase in bookstores. Download the One Read app to listen to an extended interview with the author.