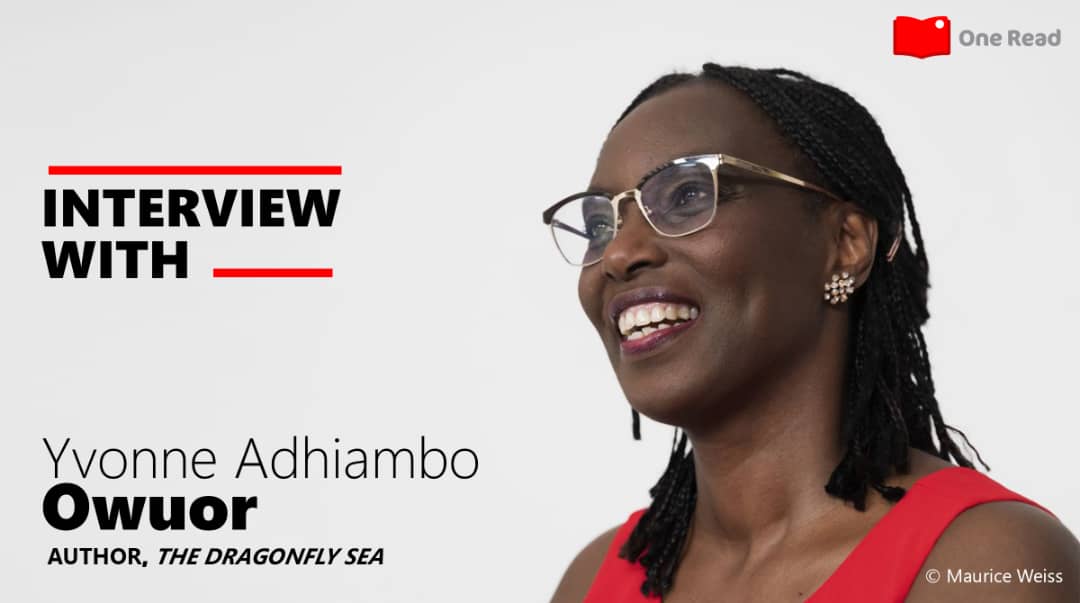 By One ReadDecember 28, 2020 One Read Interviews

Yvonne Adhiambo Owuor is the author of critically-acclaimed novel Dust. In this interview, she talks about her novel, The Dragonfly Sea, the One Read Book of the Month for December 2020.

Aicha Sama: What was the process of writing the character of Ayaana like, through her different stages of growth? What would you say are her defining traits or moments, and why?

Yvonne Adhiambo Owuor: Fascinating to experience a character grow before the eyes of your (figurative) pen. Defining moments; several, but most significantly was the moment, not in the story, when she gave herself over to the ocean in complete trust.

In the book, Muhidin says, “To savour its essence. To do that, you must taste at least three languages on your tongue.” What was the process behind infusing so many languages into this story?

Exactly what Muhidin suggests. The experiencing of one thing through the prism of languages. It does deepen one’s sense of it. I love words and how they look on page. I love the texture of words and how they show up in a sentence. Moreover, I sought to convey the character of a place like Kenya, and indeed most parts of the continent; how several languages co-exist, co-habit with each other in a single space with such casual ease.

What led you to write this story in a contemporary context in spite of its historical beginnings?

How do the characters’ different interactions represent Sino-East African relations, and on a wider scale, cultural diffusion and difference?

At the core of this relationship is human needing, searching; curiosity, mystery. At the heart of human encounter, once the veneer of geopolitics slips away, which happens very quickly, you find the older human questions at play; who am I here? Who do I love now? How do I become? What does life mean here and now, for me? The personal and intimate quest take over.

How long did it take to write The Dragonfly Sea?

What was the inspiration behind the aspects of Sufism within Islam in Ayaana’s journey?

The older Swahili culture, and its spiritual patrimony that encompasses the worlds that the
poet/teachers in the story come from.

Which character do you relate to most, and why?

Hard to say. Love them all.

How would you connect “the Terrorised” to events occurring today in East African countries and cultural assimilation?

Not well-informed. Historically myopic. Terribly damaging to human relationships. Obsessed with self-mythologies at the expense of reality and possibility. Overly militaristic. Contributor to human and heritage losses.

How does the connection between Pate and China in The Dragonfly Sea reflect Sino-African reflections in the real world?

Pate Island and China’s connection is real, embodied, present. Africa-China reflections in the real world is fraught with so many misunderstandings and unfortunate silences that contribute to a miscommunication that seems to restrict itself to trade, business and the BRI. Such a pity. There is so much more between us that belongs to a 1000 year old story.

Which scene or character was most difficult to write?

Ayaana’s Turkish sojourn with Koray and his family. I had hoped she would not go but the Muse thought otherwise.

Aicha Sama is a college freshman studying Biomedical Engineering, with interests in Public Health. Currently interning at Folio Literary Management, she hopes to discover more African literature and authors through her work with One Read. Her free time is taken up with journaling, sketching outfit designs, and writing. She can be found on Instagram at: @ohaicha