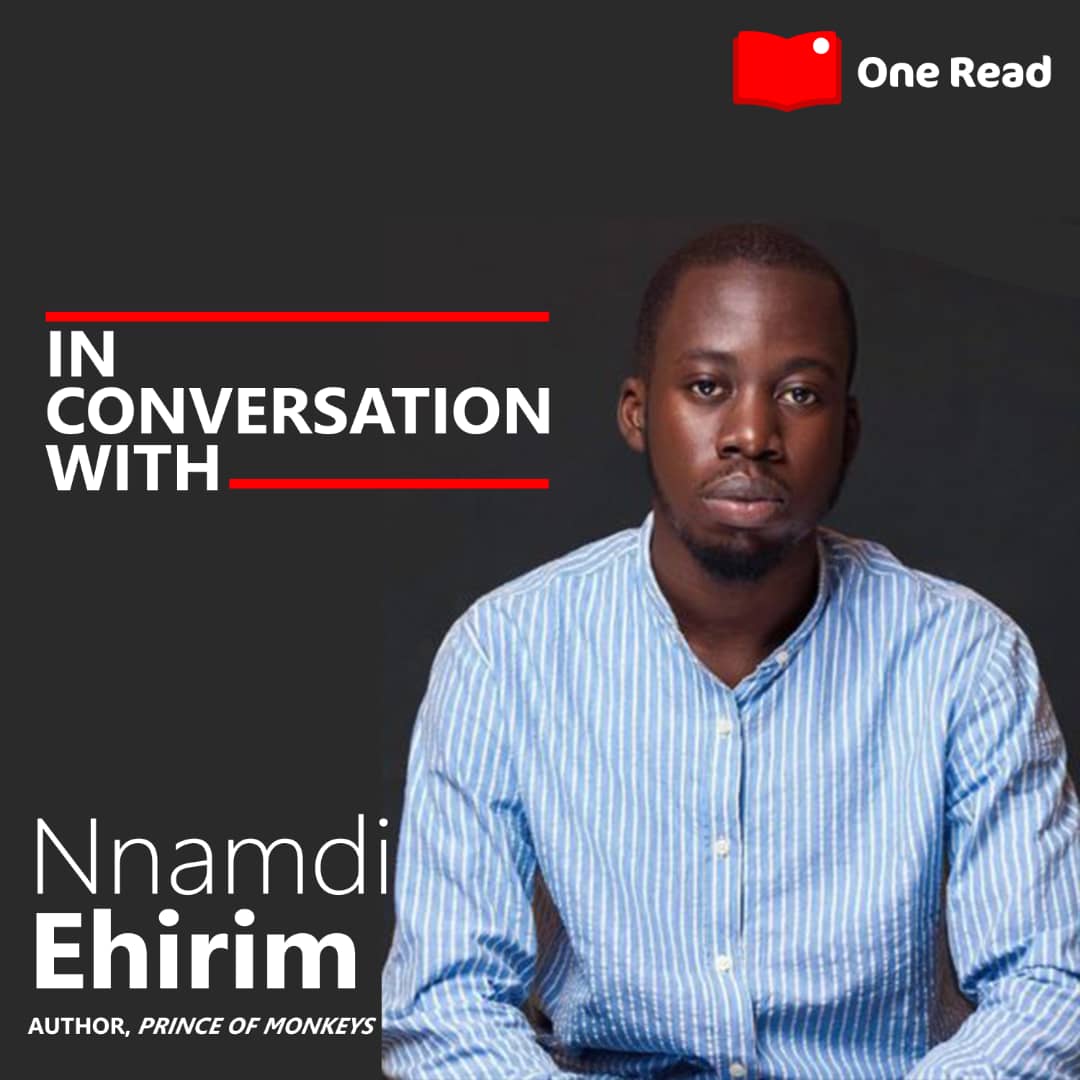 By One ReadOctober 28, 2020 One Read Interviews

In this interview, we talk to Nnamdi Ehirim, author of Prince of Monkeys, the One Read October Book of the Month.

One Read: Congratulations on the publication of your book, Prince of Monkeys. How does it make you feel that it has been selected as One Read’s October book of the month?

Nnamdi Ehirim: I consider it a great accomplishment to be featured on One Read, especially considering the authors that have come before me. I’m always looking for ways to share my work through new mediums. This is the first project of this type I’ve been involved with so it has been fulfilling in that regard as well.

We enjoyed your use of colour to illustrate Ihechi’s mood throughout the novel. What did you hope to achieve with this technique?

On a storytelling level, I wanted it to be a reflection of the protagonist’s growth. He was very perceptive as a child and saw the world through an imaginative lens. As he gets older, the lens fall off and he becomes more of a realist, more matter-of-fact. He is now burdened by conflicts of adulthood, which suppress the imagination of his childhood. Also, on a stylistic level, I was interested in exploring colours as metaphors, painting pictures with words in the most literal sense.

In your view, is Mendaus as much of the hero he’s portrayed to be or he never quite fits in? And does his upbringing play a major role in how he turns out?

Mendaus is imperfect, as all heroes truly are. His biggest flaw is his idealism and tendency to lead a perfect movement. But I think all the characters are heroes in their own way and just as imperfect. Like Mendaus, Ihechi and Pastor’s son also had very strong opinions on the path to social revolution. The women of Ihechi’s family—his Mum, Effy and Tessy—were also heroes in their own way, charting their own paths to personal liberation. It really all just depends on what kind of guidance you’re looking for.

The characterisation in this novel is in-depth and makes the reader sympathise readily with the highs and lows of each character. Which of these characters did you enjoy writing the most?

I definitely enjoyed writing Zeenat the most. I wanted to write a character who was pure hearted and full of good vibes, the type of person I would want to be if the world was a perfect place.

Do you have any writing rituals?

The closest thing I have to rituals regarding my writing is that I’m constantly  observing the world and taking notes, everything from people watching to conversations to social media. It all feeds my creative process in some way. The actual putting pen to paper to write prose is even more erratic, there’s no fixed schedule to it. I write whenever free time and will power aligns, however rare that is.

Just like in Ihechi’s case, are you of the opinion that in the end, we all become the parts of our parents we are afraid of growing into?

For the most part, yes. I think it’s normal that we pick up the habits we consistently see around us, whether or not we agree with them. And if we don’t deliberately unlearn these things, they’d become a part of us. We see it again with Aunt Kosiso and her daughter, Effy. Even though Effy loses her Christianity, she adopts her mother’s absolute attitude towards religion.

We often judge our parents in harsher ways than we do ourselves. Do you think that Aunt Kosiso’s talk with Ihechi changed the way he viewed his father?

Her talk definitely changed the way he viewed his father even though it wasn’t her intention. People are a summary of their experiences. As children, we don’t see the entire summary sheet of our parents’ experiences, we just see what they are and not how they became what they are. And so ultimately, we seek empathy without extending as much. The talk Aunt Kosiso had with Ihechi bridged that gap.

Tessy says, “Faith doesn’t feed a man.” Do you feel that her parents’ attitude towards religion and spirituality, especially as regards her sister Effy determine how she proceeds with it?

I think both sisters were affected by their parents’ attitude towards religion and spirituality in different ways. Both of them are disillusioned by Christianity and because of that one sister abandons spirituality altogether and the other finds an alternative to anchor herself in. Both reactions are valid.

When writing this novel, what did you hope readers would learn from it and from a character such as Zeenat?

I didn’t have any grand agenda or moral lesson that I hoped readers would learn, I just wanted readers to appreciate the work for its literary merits. Like I said earlier, with Zeenat, I wrote an idealistic character, a character that was exuded joy and was good, a character I would want to be.

This year has heralded a change from our usual normal. How has the pandemic affected you personally and your life as a writer?

To be fair, it has been a net positive. The pandemic and lockdown has afforded me more time and solitude to reflect, introspect and create. There have been minimal distractions and the world has slowed down to my pace. I have no complaints.